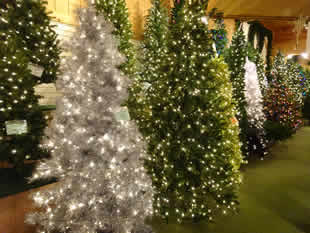 The Hanukkah and Christmas Holidays

In the non-canonical Book of Maccabees, we read: "On the twenty-fifth of the ninth month, Chislev, in the year 148 they rose at dawn and offered a lawful sacrifice on the new altar of burnt offering which they had made. The altar was dedicated, to the sound of hymns, zithers, lyres and cymbals, at the same time of year and on the same day on which th e gentiles had originally profaned it. The whole people fell prostrate in adoration and then praised Heaven who had granted them success. For eight days they celebrated the dedication of the altar, joyfully offering burnt offerings, communion and thanksgiving sacrifices. They ornamented the front of the Temple with crowns and bosses of gold, renovated the gates and storerooms, providing the latter with doors. There was no end to the rejoicing among the people, since the disgrace inflicted by the gentiles had been effaced. Judas with his brothers and the whole assembly of Israel made it a law that the days of the dedication of the altar should be celebrated yearly at the proper season, for eight days beginning on the twenty-fifth of the month of Chislev, with rejoicing and gladness." (1 Maccabbees 4:52-59)


In the KJV Bible, the word “winter” is translated from the Greek word “cheimon (G5494)” which means “rainy season”. Israel has two seasons. One is dry (summer) and the other is rainy (winter). Israel’s crops were planted when summer ended (around the time of the fall equinox). The rainy season (fall and winter) ended at the dry season (spring and summer). Israel prayed for rain at Sukkoth (Yah’s fall feast) as a physical blessing for their crops and a spiritual blessing of Yah’s counsel for them). At Pesach (Passover), they celebrated the spring harvest that grew from Yah’s blessed rain.


Could Hanukkah be Sukkoth? Both are 8-day feasts known for ceremonies with water, lights and temple dedications. Solomon kept the feast seven days and all Israel with him, a very great congregation, from the entering in of Hamath to the river of Egypt. In the eighth day they made a solemn assembly. They kept the dedication of the altar seven days and the feast seven days. On the three and twentieth day of the seventh month he sent the people away to their tents, glad and merry in heart for the goodness that YAHUAH had shown to David, to Solomon and to Israel his people. (2 Chronicles 7:8-10)


Stephen Motyer writes in “The Fourth Gospel and the Salvation of Israel” about how similar Hanukkah is to Sukkoth. “The waving of the lulab, the palm-branch and the crying of Psalm 118:25 are typical of Tabernacles. The original [Feast of] Dedication was likewise celebrated in the manner of the Festival of Booths."


Historians note the Jewish Hasmonean government at the time of Yahshuah mandated Hanukkah be kept. If indeed scripture refers to Hanukkah, John’s words indicate Yahshuah was more of an observer than active participant. W.D. Davies in "The Gospel and the Land" notes that by Messiah walking in Solomon's Porch (a cloistered area attached to the Temple’s eastern side away from the crowds) “implies Jesus distanced himself from the festival celebration.” His example is a good reason to distance ourselves from Hanukkah.


Yahshuah’s presence also seems brief as we read of His verbal accosting. Then came the Jews round about Him and said, “How long do you make us doubt? If you are the Messiah tell us plainly.” Yahshuah answered, “I told you, and you believed not the works that I do in my Father's name. They bear witness of me, but you believe not because you are not of my sheep. As I said to you: my sheep hear my voice, I know them,  and they follow me.  I give to them eternal life and they shall never perish. Neither, shall any man pluck them out of my hand. My Father, who gave them to me, is greater than all. No man is able to pluck them out of my Father's hand. I and my Father are one.” Then the Jews took up stones again to stone Him. (John 10:24-31)


Picture this vivid scene. This was supposed to be a happy festival, a holy time filled with good-natured worship, fellowship and joy among attendees. Yet in its midst, John presents a caustic atmosphere of angry threats and a murder attempt on the Messiah. Whatever Yahshuah thought of this event, it does not appear to be a time of worship or rejoicing for Him. This was not a celebration!

Some suggest Yahshuah eagerly and excitedly joined in celebrating with joyous enthusiasm. Scripture says no such thing. Yet some Messianic groups give a false impression that Yahshuah worshipped at Hanukkah, and that His implied command is we do the same. If anything, for Believers it was a day of shame. Furthermore, scripture does not indicate our Messiah ever attended a Hanukkah festival in His entire life.

Yahshuah’s conflicts with the Jewish religious authorities during Sukkoth (John 7:1-10:21) apparently shift into Hanukkah. Is it more likely that the final climatic scene (John 10:22-40) occurs on Sukkoth’s Last Great Day? Is this an example of men turning a feast of YAHUAH (Sukkoth) into a feast of man (Hanukkah)? The "Our Jewish Community" website refers to "a letter sent around the year 125 BCE from the Hasmoneans to the leaders of Egyptian Jewry which refers to the holiday as 'The festival of Sukkot celebrated in the month of Kislev (December).' So, it turns out Hanukkah was originally celebrated for 8 days because of Sukkot."

So, why is there such an emphasis on Hanukkah today? From Wikipedia Encyclopedia, “Hanukkah traditionally speaking is only a minor Jewish holiday” but “has received increasing importance in recent years as a substitute for Christmas so that Jewish children do not feel ‘left out’ during the Christian Christmas season.” Like Christmas, there is an exchange of gifts “in order to prevent Jewish children from feeling left out of the Christmas gift giving.”

Like Christmas, Hanukkah is a “feast of lights” involving candle lighting and a “Hanukkah bush” (a substitute for Christmas tree?). Wikipedia also notes, “It may, for all intents and purposes, be a Christmas tree.” Surprisingly, Judaism patterns its rituals after “Christian” traditions (many of them non-biblical). These are then revised, recycled and relabeled as Jewish tradition. In fact, the "Jewish Daily Forward" labeled Hanukkah as "Chrismukkah." (Dec. 10, 2004)

Hanukkah is often presented as a heroic story of a successful Jewish revolt led by Judah Maccabee against the Syrians in 165 B.C. Legend has it that one flask of oil remained after the Jews regained control of the Temple.  This miraculous oil lasted 8 days until a new batch of oil was prepared. Wikipedia, however, points out, “Most modern scholars argue that the [Syrian] king was in fact intervening in an internal civil war between the traditionalist Jews in the country and the Hellenized Jews in Jerusalem.”

Joseph P. Schultz writes, ‘Modern scholarship...considers the Maccabean revolt less as an uprising against foreign oppression than as a civil war between the orthodox and  reformist parties in the Jewish camp.” This form of intra-Jewish civil war occurs today between Judaism’s liberal and conservative branches. Do Believers really want to celebrate that by keeping Hanukkah?

Although the Book of Maccabees tells the Hanukkah story there is no reference to a 1-day oil supply lasting for 8-days. Very few Messianic or Jews are aware the source of this tradition is from the Talmud (Shabbat 21b), which was composed several centuries after Yahshuah’s resurrection. Was this so-called “miracle” of oil a man-made tradition added in response to the miracle of Messiah’s birth, which is celebrated as Christmas at the same time of year?

Was there actually a "Miracle of the Oil?" Rabbi P. Kipnes of Congregation Or Ami says that the miracle of the oil "was reported in the Babylonian Talmud in 500 C.E., almost 700 years after the Maccabees recaptured the Temple. The editors of this story recast the Macacbean revolution as the story of miracles...By inventing the story..." Note: there really was no such Hanukkah miracle! Other reputable sources also confirm this fact. In an article on "Why is Hanukkah important to the Jewish people?" (wiki.answers.com) we read that "the miracle of the oil lasting 8 nights is only a Talmudic legend that was first written down 500 years after the Maccabean war. It is not considered to be [an] actual miracle..." Rabbis Barr and Baum of the "Our Jewish Community" organization say, "A few hundred years later, the rabbis of the Talmud concocted a story about a miracle of oil... There’s no historical accuracy to the oil tale."

Many believe that modern Judaism is identical to the Old Testament religion, and that its rituals as practiced today reflect YAHUAH’s commandments to His people. Instead, Wikipedia notes Jewish customs are “an assimilationist variation” of the New Testament, which “syncretizes the [New Testament] customs.”

While adopting some Messianic practices, Judaism abandons other biblical practices due to the association with Believers in Yahshuah. To a certain extent, Judaism through the centuries has transformed into a religion of Messianic avoidance. For example, no “apostles” appear in Judaism because that term is associated with Believers in Yahshuah. The “Theological Dictionary of the New Testament” states, “...from the middle of the first century the Greek word [apostolos] has become a constituent part of the distinctively Christian vocabulary, and could not therefore be considered for Jewish use.” Another biblical custom steadfastly avoided as well is “...the laying on of hands...seems to have been later abandoned by the Jews in view of its adoption by Christians.”

Pulpit Commentary confirms this is a normal practice, “There are many passages of the Talmud which raise the suspicion that the rabbis are purposely running counter to the teaching of the New Testament.” Thus, Judaism identifies itself by what it is not. It is a religion obsessed with countering Messianic faith and practices, rather than a religion of positive obedience to Yah’s Word. This is not strictly a Jewish problem. How many Christian believers identify their teachings by what is popular in the world, or by avoiding what is unpopular, instead of standing firm in the Word of Yah?

A Messianic group promoting Hanukkah suggests assemblies celebrate with snacks made with olive oil in honor of the holiday. Among Israelis, a favorite custom is to eat jelly-filled donuts. (Did Judah Maccabees have a sweet tooth?) In the United States, Hanukkah is sometimes celebrated by night-time car parades with Jewish music blaring from loudspeakers complete with flashing lights. It seems safe to conclude that the modern festival has gone far afield of its original historic foundation.

Messiah declared Himself as the renewed temple (John 2:19-22). So, why would He celebrate the Feast of Dedication? He is the True Temple and dedicated the old temple for destruction.

Why would we honor  the wrong temple? For that matter, why celebrate a temple that no longer exists and that Messiah condemned to destruction and replacement?

I end with more questions for BYA. Should Hanukkah, a man-made holiday whose basis is one line within the Talmud and a fleeting, uncertain reference within scripture, be equivalent to a holy day of YAHUAH? Should Hanukkah hold any position in worship? Which are beneficial, Yah’s traditions or man’s? Does Hanukkah depict Yah’s Salvation Plan, or teach believers about Yahshuah? Why memorialize an intra-Jewish civil war? Are we to follow men in partaking of rabbinical leaven?