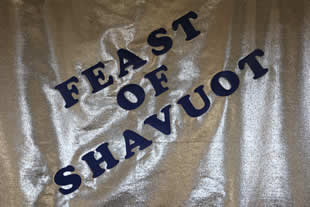 The Feast of Shavuot or Pentecost

Ancient Israel was an agricultural society that had three main harvests: (1) early spring (primarily barley), (2) late spring (primarily wheat) and (3) early fall (primarily fruits and vegetables). Israelites celebrated these harvests with festive dancing, eating and drinking. They also praised and worshipped Elohim with sacrificial offerings, with prayers and with songs of thanksgiving to YAH for the bountiful harvest. YAHUAH scheduled these harvest feasts with His “heavenly signs”, the “sun, moon and stars” (Genesis 1:14-15).

Barley was harvested prior to the spring offering of Bikkurim (“FirstFruits” feast). Wheat was harvested two moons (months) later for Shavuot. From these harvested grains (spiritual symbols of new life and creation) Israelite priests offered a barley sheaf before YAHUAH (Leviticus 23:10-11) at FirstFruits. The Israelite priests waved two loaves of leavened wheat bread before YAHUAH (Leviticus 23:17) at Shavuot. The barley offering foreshadowed Yahshuah’s resurrection as the first of the first fruits that would be harvested for YAHUAH.

Another spiritual symbol of the harvest of souls into YAHUAH’s kingdom occurs during the fall festival of Succoth (Tabernacles). The fall harvest of fruits and vegetables foreshadows the time shortly before and then after Yahshuah’s return when a great multitude of will be gathered into His Kingdom between the time of great tribulation and during the Messianic age (the 1000-year Millennium reign of Yahshuah).

The timing of Shavuot is controversial. The reason is that many observe this feast on different dates based upon their various religious traditions or scriptural interpretations. Most agree on two points: (1) It is celebrated in late spring (May/June on the Gregorian calendar, which is the third month of the Jewish calendar); and (2) It is celebrated 50 days after a day referred to as First Fruits. When people celebrate Shavuot (or Pentecost) depends upon when they recognize their day of First Fruits.

According to different Jewish sects, their holiday will be held on 5/14/13, 5/15/13, 5/16/13, or 5/19/13. For example, followers of Orthodox Judaism will observe a holiday in mid-May. The Jewish sect of Sadducees (also, Boethusians and Karaites) say that their holiday occurs on “the morrow of the seventh Sabbath” (Leviticus 23:26). They count seven Sabbaths (Saturdays), or weeks, starting with the Sabbath that occurs during their unleavened bread festival. Thus, their holiday always occurs on a Sunday.

Most “Christian” denominations specify that their Day of First Fruits is always on resurrection Sunday of the Holy Week. While similar to Jewish Karaites, an important difference is that Christians celebrate according to when “Easter” occurs. Using a Gregorian (Roman) calendar, “Easter” is scheduled as the first Sunday following the first full moon observed after March 20 or March 21 (the spring of each calendar year). This year, the date aligns with the Jewish calendar, although that is not always the case.

BYA follows a scriptural calendar for YAH’s feasts. Based upon heavenly signs (i.e. from the sun, moon and stars) and according to scripture (Deuteronomy 16:9; Leviticus 23:26), we count seven Sabbaths from our day of FirstFruits (4/19/13) plus one more day for a total of 50 days. As evidenced by the different dates when people observe this feast, it is apparent that no consensus has been reached at this time. Soon, Yahshuah will sort everything out and get everyone worshipping at the right times for the right feasts. In the mean time, it behooves each Believer and follower of Yahshuah to diligently study scripture so that they might become convicted within their own heart as to when they should celebrate Shavuot.

Many believe Shavuot marks the anniversary date of when the Israelites received YAHUAH’s Word at Mt. Sinai (Exodus 19:1-8; Numbers 33:3). In the 3rd moon of the year, after crossing through the sea to escape Egypt, the Israelites stood before YAHUAH at His Holy (“Kodesh”) mountain of Mt. Sinai. Their physical bodies were consecrated, washed and assembled to receive Yah’s Torah for a Marriage Covenant (“Ketubah”). The festival symbolizes the Bride (Israelites) becoming betrothed to YAHUAH (Exodus 19-24).

This happy occasion soon gave way to a harsh reality. Yah gave His people the words of life to live by, but because of the hardness of their hearts they were unable to stay faithful. While YAHUAH entered into a marriage contract with Israel, His chosen ones were not ready to live up to the covenant terms. They were unfaithful to YAHUAH Elohim (and Yahshuah, their spiritual husband). They disobeyed Torah (Yah’s righteous instructions). Three times Israel said “I do” to their wedding vows (Exodus 19:8; 24:3-7). Yet soon after accepting their marriage vow, they turned from YAHUAH to worship a golden calf (a pagan deity from Egypt). Scripture likens Israel to an unfaithful wife (Ezekiel 16:1–29).

Like Shavuot marked the start of a special relationship between Yah and His Israelites, Pentecost also marked the start of a special relationship between Yahshuah and His Believers (the Church). A few days after Yahshuah ascended to His heavenly throne (Acts 2:5), the apostles and early disciples assembled as commanded in Torah, and as Yahshuah told them. “And, (Yahshuah) being assembled together with them, commanded them that they should not depart from Jerusalem, but wait for the promise of the Father, which, saith He, ‘You have heard of me. For John truly baptized with water. But you shall be baptized with the Holy Spirit (Ruach ha’Kodesh) not many days hence. (Acts 1:4-5)

At this Pentecost, the Holy Spirit empowered these Believers (Acts 1:5-8). They changed from spiritually weak individuals (John 2:3; 20:22–23) into a spiritually strong assembly (Acts 2:14–41). After receiving supernatural gifts (1Corinthians 12), they were equipped to assist in the harvest of human souls for Yahshuah’s Body, the Church.

Pentecost symbolizes when the Church (“Ecclesia”) is betrothed as a Bride to Yahshuah in Jerusalem (Acts 2). With hearts of flesh replacing hearts of stone, and filled with Elohim’s Spirit, the Church is empowered to keep Yah’s Torah-commands. YAHUAH’s salvation and redemption plan was initiated ages ago to bring people into a life-giving relationship with Him via Torah. Today, Yah’s righteous instructions come to Believers through Elohim’s Word, Yahshuah haMessiach, the Living Torah. He now leads and guides His people through the wilderness of life not as a pillar of fire over a physical tabernacle, but through the fiery Spirit of Elohim. He now lives in the spiritual temple of each Believer as Elohim spiritually guides them from within.

The fundamental message of Shavuot was foreshadowed at Mt. Sinai and its purpose was revealed at Pentecost. The Holy Spirit inscribed Torah on the hearts of first century believers and empowered them to supernaturally take Torah’s message (the light of Yah’s truth) and couple it with Yahshuah’s message of the coming Kingdom into a lost and dying world.

Other foreshadows of Yah’s Feasts from Scripture:

In summary, at Passover, BYA celebrates the release of our spiritual bondage in the world (Egypt) as we are saved from the death angel by the Lamb’s blood on the stake. At Unleavened Bread, BYA starts the process of our sanctification by removing Egypt and sin (leavening) from our homes and bodies. We do none of this on our own, but only by Elohim’s grace and mercy. Like ancient Israelites, we cannot conquer (master) sin. We need Yahshuah to do that for us. At Mt. Sinai, Israelites heard and understood Elohim’s Word. At Pentecost, BYA hears Elohim’s Gospel preached in our own language so that we can evangelize the Gospel to others.

As Yahshuah’s disciples, we are empowered of the Holy Spirit to lead a spirit-filled life, to defeat sin, and to obediently follow YAHUAH’s commands, His Torah. Thus, we continue to embark on a journey that will end with a holy, righteous victory over sin and the forging of an intimate, anointed relationship with Elohim. This is Yah’s glorious picture of His wondrous redemption plan.

We all need the revelation of Torah. This is a core message of Shavuot. This feast reveals answers to our life’s most challenging questions: What is the right way to live? What is the meaning of life? How can I have a relationship with my Heavenly Father, YAHUAH Elohim? By whatever name you choose to call this festival, whenever and wherever you choose to celebrate it, may it soften your heart to Yah’s Word and may the fire of Yah’s Holy Spirit fall abundantly upon you.

Please consider gathering with BYA as we celebrate and glorify Yahshuah ha’Messiach. Renew your commitment to be a true witness of our Savior. Profess your faith to the world in words and action. Give evidence of the truth in becoming a witness of who Yahshuah is and what He has done in our lives.

May Yah be with you and His grace with all, Elder Curt