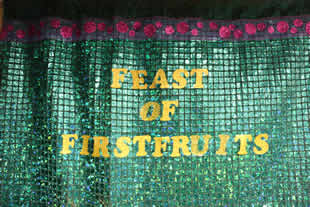 The Day of Firstfruits

Let us consider this important Scripture passage: “And the feast of harvest, the firstfruits of your labors, which you have sown in the field: and the feast of ingathering, which is in the end of the year, when you have gathered in your labors out of the field.” (Exodus 23:16) Hereby, Scripture paints a picture of the “feast of harvest” (i.e. firstfruits) as being a gathering of the righteous saints along with their righteous labors (good works), which were sown in the field. I heard a voice from heaven say to me, “Write, blessed are the dead who die in Yahushuah from henceforth: Yea, says the Ruach that they may rest from their labors and their works do follow them.” (Revelation 14:13)

In the natural world, our labors (works) are done that we might have good food on our tables, which in return sustains our natural lives. If we consistently eat bad food, we get sick and eventually die. Likewise in the Ruach (Spirit), we should labor in “the works” of Elohim, that HE might bless us with good spiritual food that will sustain our spiritual lives. “Do not labor for the meat [food] which perishes, but for that meat [food] which endures unto everlasting life, which the Son of Man shall give to you. For, Him has Elohim, the Father, sealed.” Then they said to Him, “What shall we do that we might work the works of Elohim?” Yahushuah answered and said to them, “This is the work of Elohim that you believe on Him whom He has sent.” (John 6:27-29)

Did you catch that? What are the “works of Elohim?” Even that we “believe” on Yahushuah, whom Elohim, the Father, sent. How hard do you work at believing Him? If you are like most, the answer is not very hard at all, for to most “believers” belief is effortless! That being said, Scripture teaches that YAH’s Word is truth (John 14:6; John 17:17) Thus, we must conclude that something is wrong with the belief system of most people.

So, let us review the scriptural meaning of what it means to “believe.” The King James Version (KJV) of the Bible translates the word “believe” from a Greek word “pisteuo” (G4100), which means “to have faith.” This word “faith” comes from the root word “pisto” (G4102), which means “persuasion.” Hereby, we deduce that to “believe” on Yahushuah means to have faith in Him. In other words, we are to “be persuaded” by Yahushuah. Now, let us revisit that last verse after inserting a scriptural understanding of “believe” into the text. Yahushuah answered and said to them, “This is the work of Elohim that you be persuaded by Him whom He has sent.” (John 6:29)

Now I ask you, does Yahushuah effortlessly persuade you, or do you have to work at being persuaded by Him?  I know it’s difficult to think at times when you are put on the spot. So, I will assist you in answering by providing a few of His commands as recorded in the Gospel of Matthew (Mattith’Yahu):
“Think not that I come to destroy the law [Torah], or the prophets [Nevi’im]. I come not to destroy, but to fulfill [satisfy].” (5:17)

“But I say to you, that whosoever looks on a woman to lust after her has committed adultery with her already in his heart.” (5:28)

“But I say to you, that whosoever shall put away his wife, saving for the cause of fornication, causes her to commit adultery: and whosoever shall marry her who is divorced commits adultery.” (5:32)

“But I say to you, that you resist not evil. But, whosoever shall smite you on your right cheek, turn to him the other also.” (5:39)

“But I say to you, love your enemies. Bless them who curse you. Do good to them who hate you, and pray for them who despitefully use you, and persecute you.” (5:44)

These are but a few of Yahushuah’s 100+ commands, which demonstrate how difficult being persuaded of Yahushuah can be at times. Hence, He called it, the “works of Elohim.” “And he who overcomes, and keeps My works unto the end, to him will I give power over the nations.” (Revelation 2:26)

Now, with this scriptural understanding of what the first of the firstfruits are … and of what our “job (works)” are … let’s read another of YAH’s commands concerning firstfruits. And YAHUAH spoke to Moses, saying, “Speak to the children of Israel and say to them, ‘When you come into the land which I give to you, and shall reap the harvest thereof, then you shall bring a sheaf of the firstfruits of your harvest to the priest.’” (Leviticus 23:9-10)

An important thing to note is that this command could not be fully kept until they had entered the land, which YAH had promised them!  In fact, the only feast days that could be kept in fullness prior to entering into the land YAH promised them was Passover and the Feast of Unleavened Bread. Naturally speaking, His Promised Land was Canaan. Spiritually speaking, it is the Kingdom of Elohim. However, where is the Kingdom of Elohim today? “Neither shall they say, ‘Lo here!’ or, ‘Lo there!’ For, behold, the kingdom of Elohim is within you.” (Luke 17:21)

The land (our bodies) which YAH has given us is found within the Kingdom of Elohim, even as the land HE gave Israel was within the land of Canaan. Now scripturally understanding that the Kingdom of Elohim is within us, we should also see that the land that we should be laboring in (i.e. tilling, pruning, watering, etc.) is also within OURSELVES, first and foremost. Then, our land extends to other believers within Elohim’s Kingdom.

Now, let us consider Israel’s journey outside the land of Canaan, for this is a parallel to our journey outside the Kingdom of Elohim. As Israel left Egypt, they spoiled the Egyptians. Therefore, it was those spoils that they brought with them into the wilderness. The spoils were likewise with them as they initially walked with Elohim. This parallels our coming out of the world and bringing with us many worldly spoils that often times will spoil our walk with Elohim …

At this point in our faith walk, (i.e. while in our spiritual wilderness) it will be found impossible for us to keep the following Moedim in their fullness: Firstfruits, Pentecost, Trumpets, Atonement, Tabernacles or Last Great Day!

Prior to delivering Israel from Pharaoh, YAH destroyed the firstfruits of Egypt (i.e. their flax and barley), which is to say their form of righteousness, and their teachings and instructions. But YAH spared the crops (i.e. the righteousness, teachings and instructions of Israel) … These crops sustained Israel for one moon (month) into the wilderness, thereby illustrating to Believers (Disciples of Yahushuah) that the little truth that we gather concerning YAH while in Egypt (the world) is insufficient to sustain us through our wilderness experience with YAH …

Furthermore, let us note that the only way Israel (i.e., we as Yah’s chosen people) get out of Egypt (the world’s system) is by partaking of the Passover Lamb, that is, belief on Yahushuah ha’Mashiach.  But, initially this only gets us into the wilderness. Thereafter, we must live on manna (i.e. the bread from heaven, Yah’s Word) until we enter the Promised Land (Elohim’s Kingdom). Manna was physical bread from heaven; but it was not spiritual “Bread of Life” … this manna typifies our proving period (our wilderness experience) … it is given for the express purpose of seeing if we will be obedient to Torah. Then, YAHUAH said to Moses, “Behold, I will rain bread from heaven for you; and the people shall go out and gather a certain rate every day, that I may prove them, whether they will walk in my law (Torah), or no.” (Exodus 16:4) “Your fathers did eat manna in the wilderness, and are dead.” (John 6:49) “Not that we are sufficient of ourselves to think any thing as of ourselves; but our sufficiency is of Elohim; Who also has made us able ministers of the New Testament; not of the letter, but of the spirit: for the letter kills, but the spirit gives life.” (2 Corinthians 3:5-6)

This is a very important teaching from Yahushuah: once in the Promised Land (Kingdom of Elohim) there are no more “free” meals (i.e. the manna ceased)! This is not to say that Torah ceases, only that the proving period ended! For, we know that they still kept Torah in the land of Canaan, even as we should continue to do so upon entering into Elohim’s Kingdom. The ceasing of manna illustrates to the “born again” believer that they have proven to Elohim that they will obey HIM. Hence there is no longer a need for the curse, which was used to coerce them into obeisance …

After entering the Kingdom one is given their inheritance (land) and must freely choose to work the fields given them within the Kingdom. Unfortunately, many starve and go begging within the Kingdom simply because they are fearful, slothful or refuse to work the fields of the Kingdom that is within them … Selah … And He said to them, “Why are you so fearful? How is it that you have no faith?” (Mark 4:40) “The hand of the diligent shall bear rule: but the slothful shall be under tribute.” (Proverb 12:24) “For even when we were with you, this we commanded you, that if any would not work, neither should he eat.” (2 Thessalonians 3:10)

Yahushuah teaches that once we enter into the land, we are expected to eventually have to work to eat: “Labor not for the meat [food] which perishes, but for that meat [food] which endures unto everlasting life, which the Son of man shall give to you: for him has Elohim, the Father, sealed. (John 6:27)

When Israel first entered the land, it was at the beginning of the year during harvest time, they therefore were able to eat of fields of the Promised Land that year, that is, these were fields that they didn’t have to work (i.e. these were the fruit of someone else’s labor). This is why they could not keep the Feast of Firstfruits with the barley of the land: “And the feast of harvest, the firstfruits of your labors, which you have sown in the field: and the feast of ingathering, which is in the end of the year, when you have gathered in your labors out of the field.” (Exodus 23:16) Speak to the children of Israel and say to them, “When you come into the land which I give to you, and shall reap the harvest thereof, then you shall bring a sheaf of the firstfruits of your harvest to the priest.” (Leviticus 23:10)

Eating the fruit of someone else’s labor is a parallel to the “born again” believer just entering the Kingdom of Elohim. At that point, all that they live on is the fruit of another’s labor, for example, the commandments of Yahushuah (i.e. the bread of life) and the teachings and instructions of the apostles …

Once we inherit the land (Kingdom) it is finally possible for us to keep the other Feasts of YAHUAH, like Firstfruits (i.e. the firstfruits of our labor). Working the natural fields of the world is hard. But it can be very rewarding work. Should we expect our spiritual work to be any less difficult, or rewarding?

To summarize what we have learned, have you entered into the land (Kingdom of Elohim), or are you still wandering in the wilderness waiting to die and be reborn, so that you might enter? If you are in the land (Kingdom of Elohim), are you working the fields given you?  Do you have a harvest this year? Will you wave the firstfruits of your labor, which is to say, the righteousness of Elohim along with the teachings and instructions of Elohim, etc.? “For the fruit of the Spirit is in all goodness and righteousness and truth.” (Ephesians 5:9